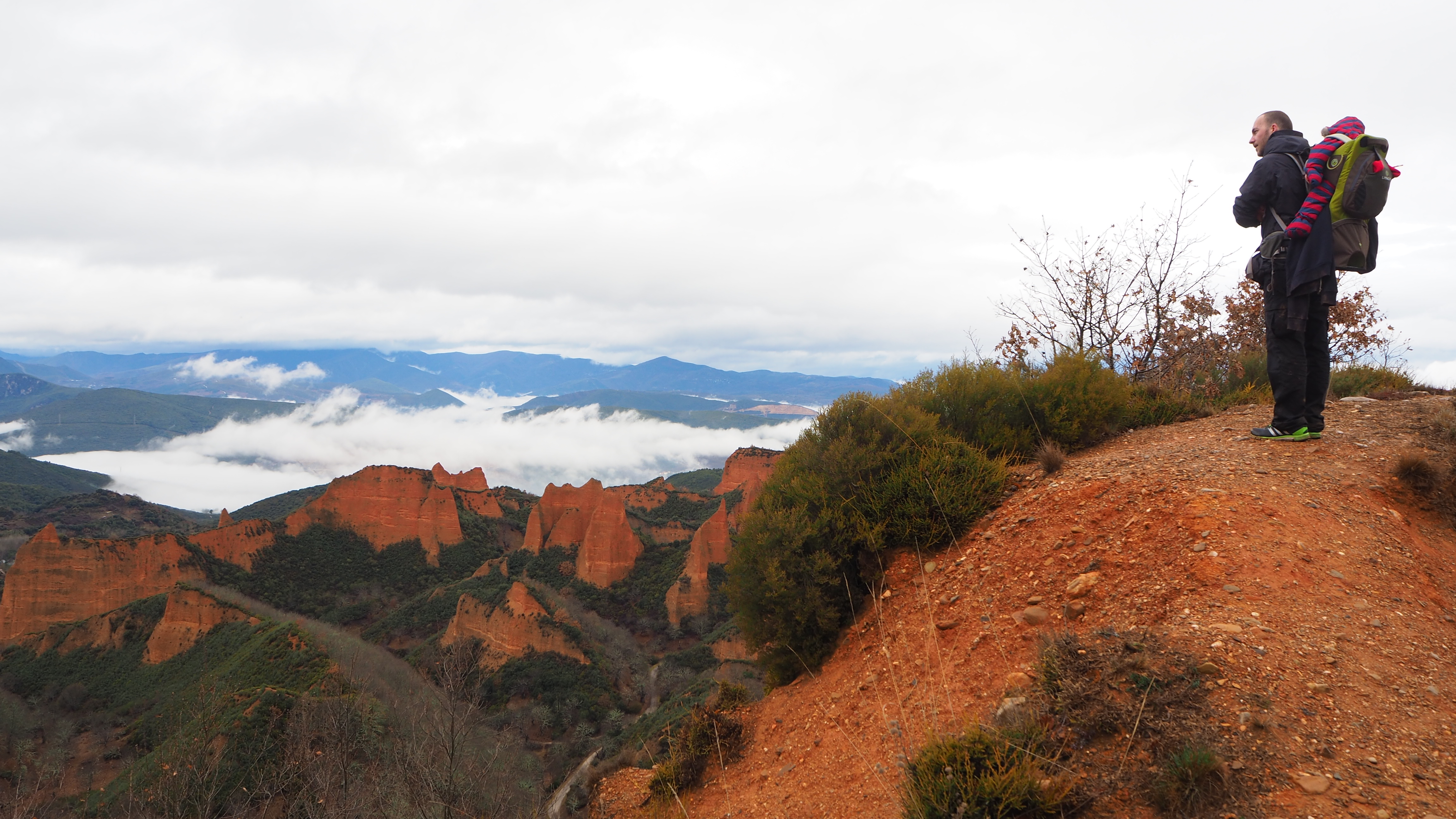 As we are travelling in the winter, we’ve noticed that we’re usually the only tourists in town. We get quite a few strange looks as we carry Ethan in the baby backpack, with Terry adorning his red and green stripped bobble hat, and me with the camera at the ready. They must think we are mad visiting their towns on a cold winters day! But we see this as an opportunity and to our benefit as the town/city isn’t bustling with people and often seems quite eerie! Although it does put some pressure on our Spanish lingo abilities (Jen anyway, Terry’s Spanish abilities are almost zero and Ethan prefers to speak in baby talk).

We arrived to Las Medulas on Sunday, around lunchtime after a number of steep, mountain roads up to the carpark. We weaved our way to the top, mostly in second gear, our Motorhome doing her best to get us their safely. Again, we were the only car/van in the carpark. No one was as crazy as us to drive up a mountain in the rain and fog! 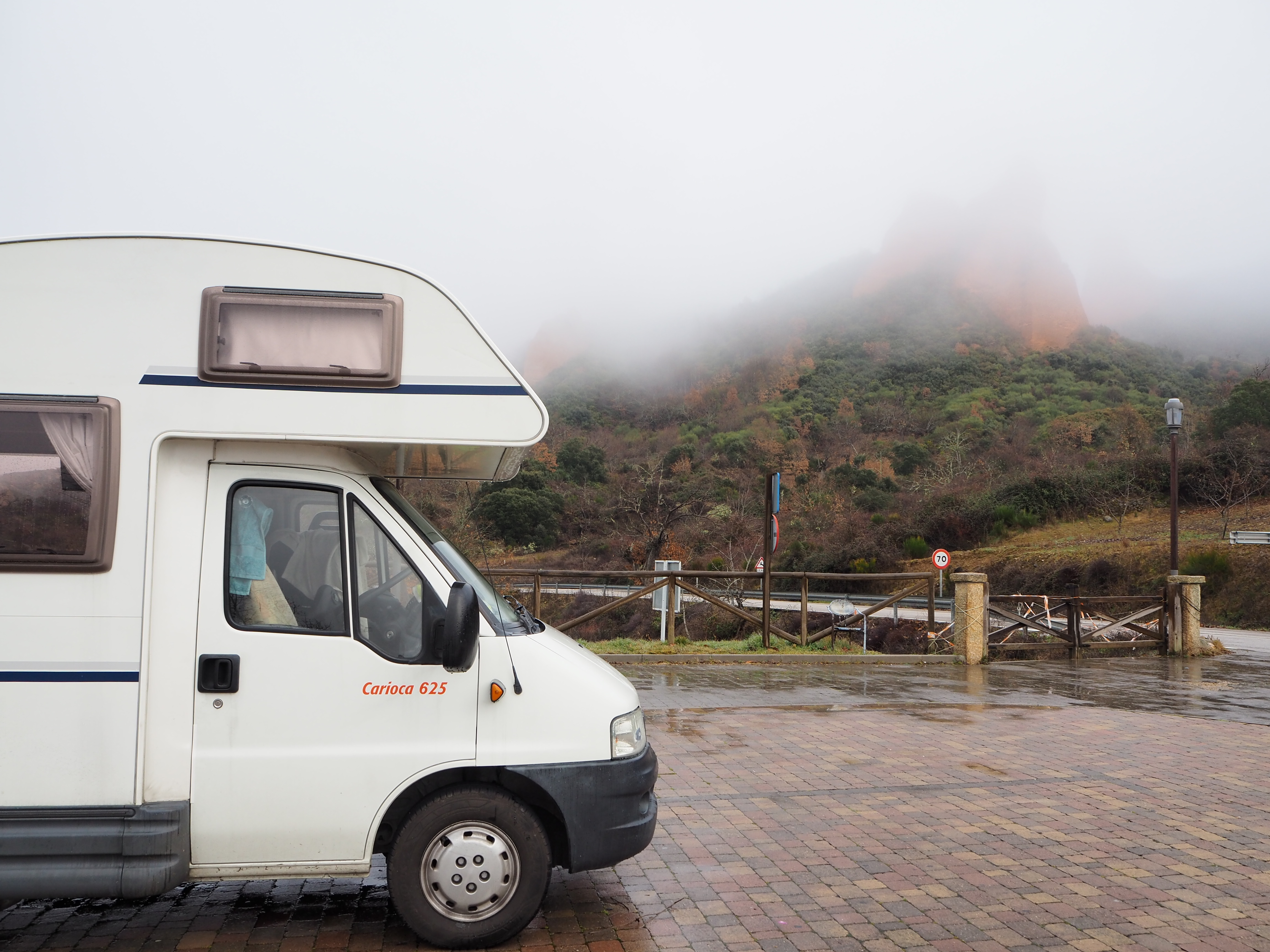 We had our fingers crossed (does that even work?) for the weather to clear. It didn’t but we could not spend the rest of the afternoon in the motorhome. Ethan would go mad! Whilst I tried to keep munchkin entertained, Terry went to the little archaeological museum/tourist info office to try to investigate what we could do in the wet, Spanish foggy weather up this mountain. It was a pretty poor attempt at speaking Spanish but he returned with a  map and a rough idea of what the very helpful lady had said. 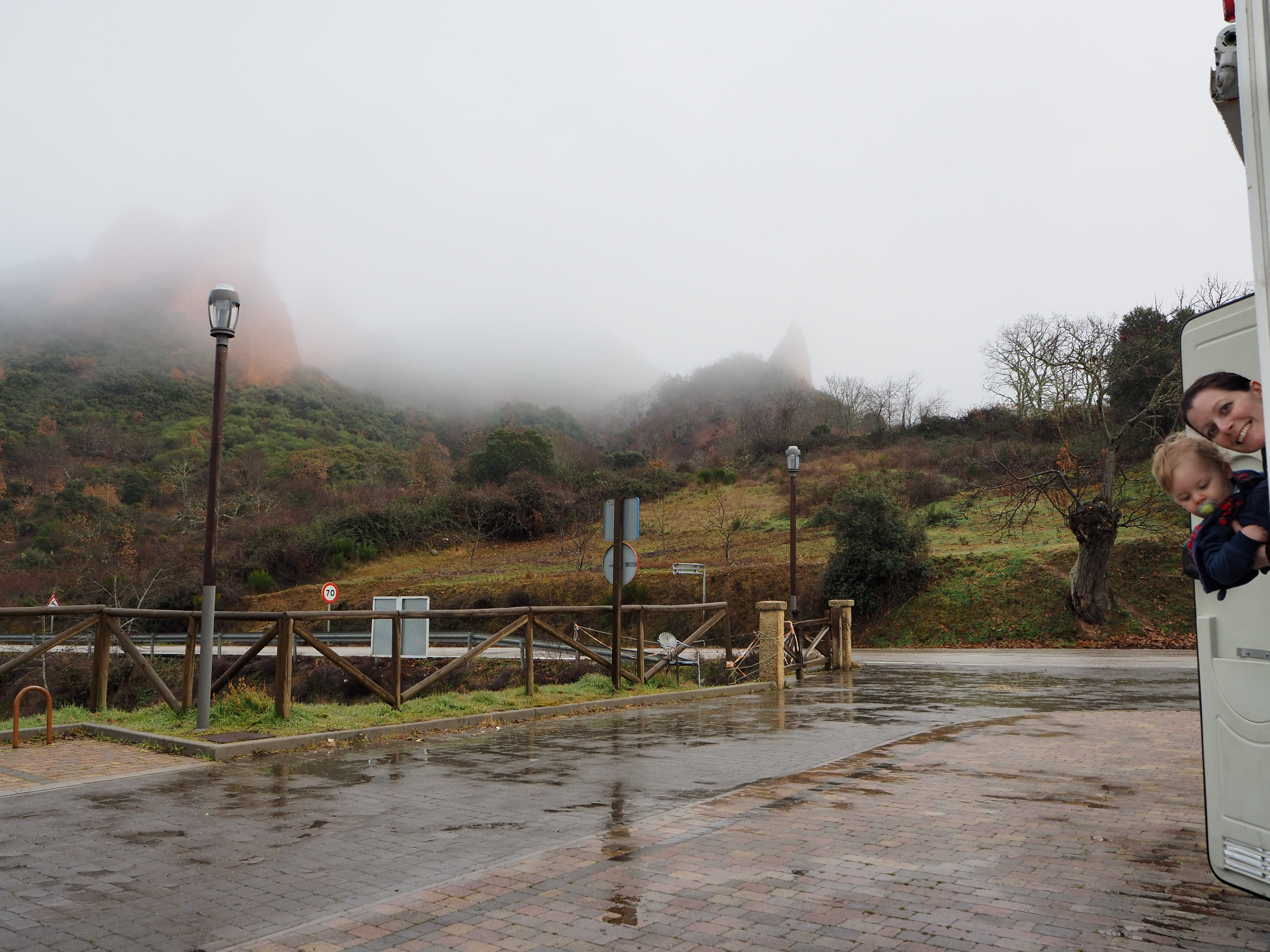 We decided to venture out into the little village, umbrellas at the ready and walked around what seemed like a ghost town. We think the village must just close down in the winter as there was literally no one around. Every house just shut up with signs on a few little bars and cafes saying ”closed for the holidays”….long holiday Spain!

After a short walk, we turned back, defeated and got all warm and cosy, prepared to stay the night in the museum carpark, which was also recommended in a trip advisor review. Determined to ride out the weather as this place seemed too good to miss, we were convinced the fog would lift, just for a few hours in the morning to allow us to see the strange site behind it. It was after all a UNESCO world heritage site.

Morning came and we looked out of our window to the beautiful, Las Medulas.  Let me tell you a little about the history of these weird and wonderful orange shapes. 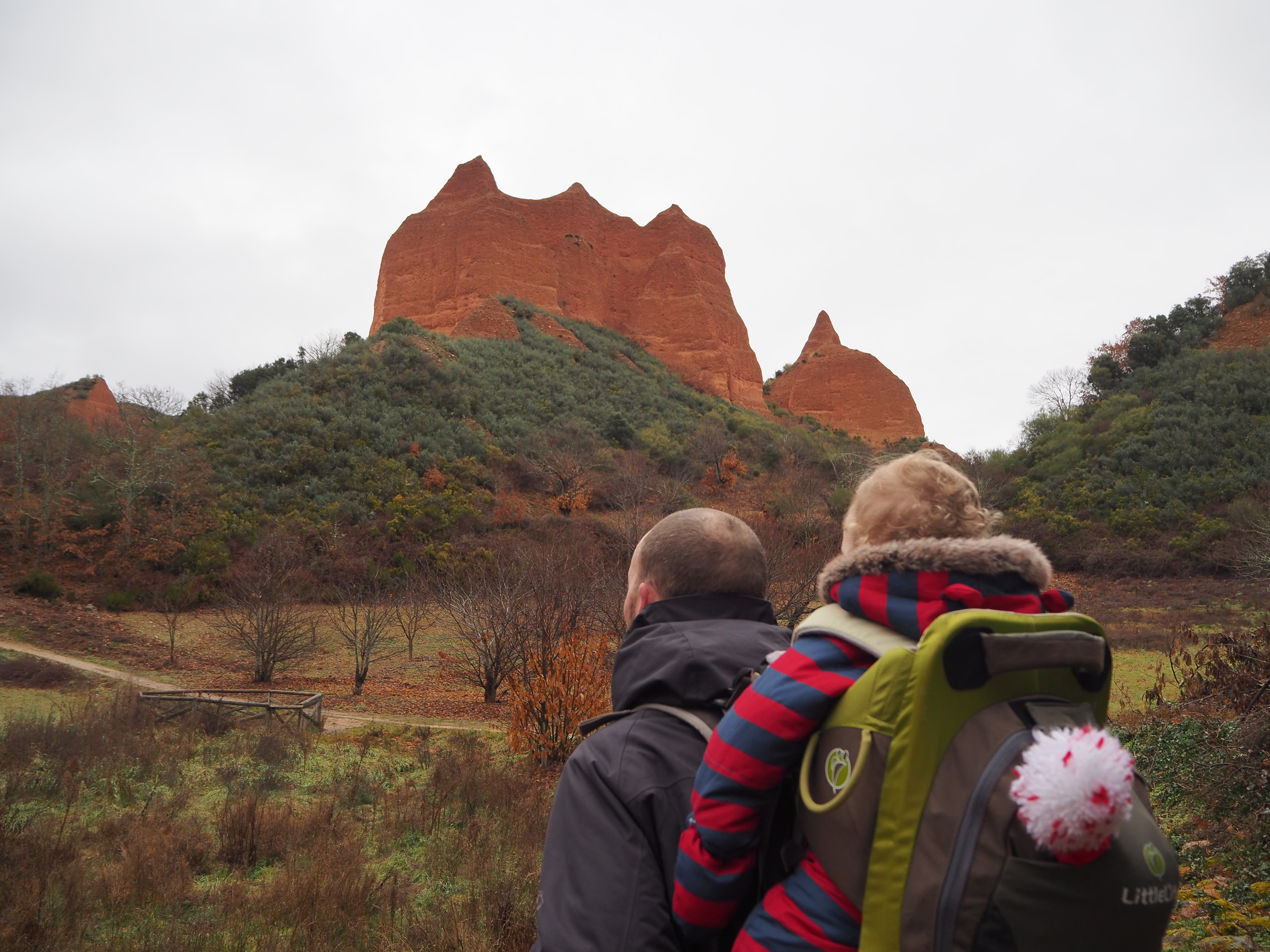 These are the jagged remains of hills that were stripped down by Roman mining. It is said that around 5 tonnes of gold were ripped from the hillsides using specially constructed canals. Water was the main means of extracting the gold. A legendary traveller witnessed the technique as hydraulic mining. He said,

‘What happens is far beyond the work of giants. The mountains are bored with corridors and galleries made by lamplight with a duration that is used to measure the shifts. For months, the miners cannot see the sunlight and many of them die inside the tunnels. This type of mine has been given the name of ruina montium. The cracks made in the entrails of the stone are so dangerous that it would be easier to find purpurine or pearls at the bottom of the sea than make scars in the rock. How dangerous we have made the Earth!‘

What was left was this eerie landscape and the name Las Medulas. These once served as the main source of gold for the entire Roman Empire, pretty impressive stuff! It really is one of the most bizarre landscapes you can see in Spain. Terry was excited as mountains and caves and hikes are his thing! 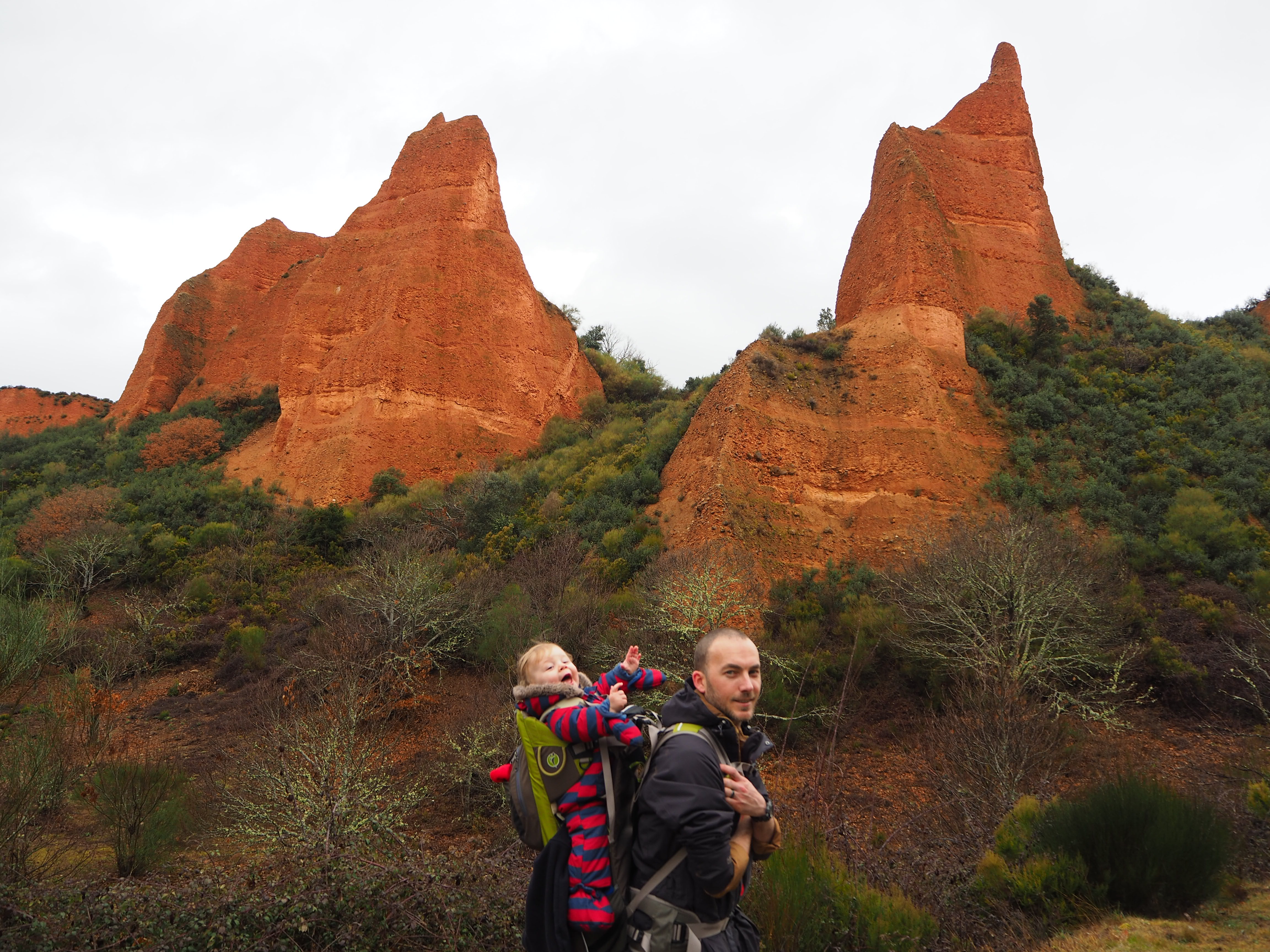 There are a few trek options, so we decided to take the longer trek option and set off early (well around 9am!). The walk was spectacular and filled with amazing views. The fog was slowly but surely coming in along the gorged out surrounding mountains, but we knew with a brisk pace up and down the undulating, strange, horse-chestnut-filled-land, we could out run it!

The best views can be seen from the Mirador de Orellan which involves a pretty steep trek up the mountain and with a near-two-stone baby on your back, it was all the more challenging! But Terry likes a good challenge. The good thing is that all the walks start from the village, so the best place is to park and orientate yourself from there.

On our chosen route, Valinas, there were two main caves along the way that you are free to explore, La Cuevona and La Encantada. Just one little sign in each warning us of falling rocks, pretty much total danger to life. Other than that each cave/opening is ready to be explored. 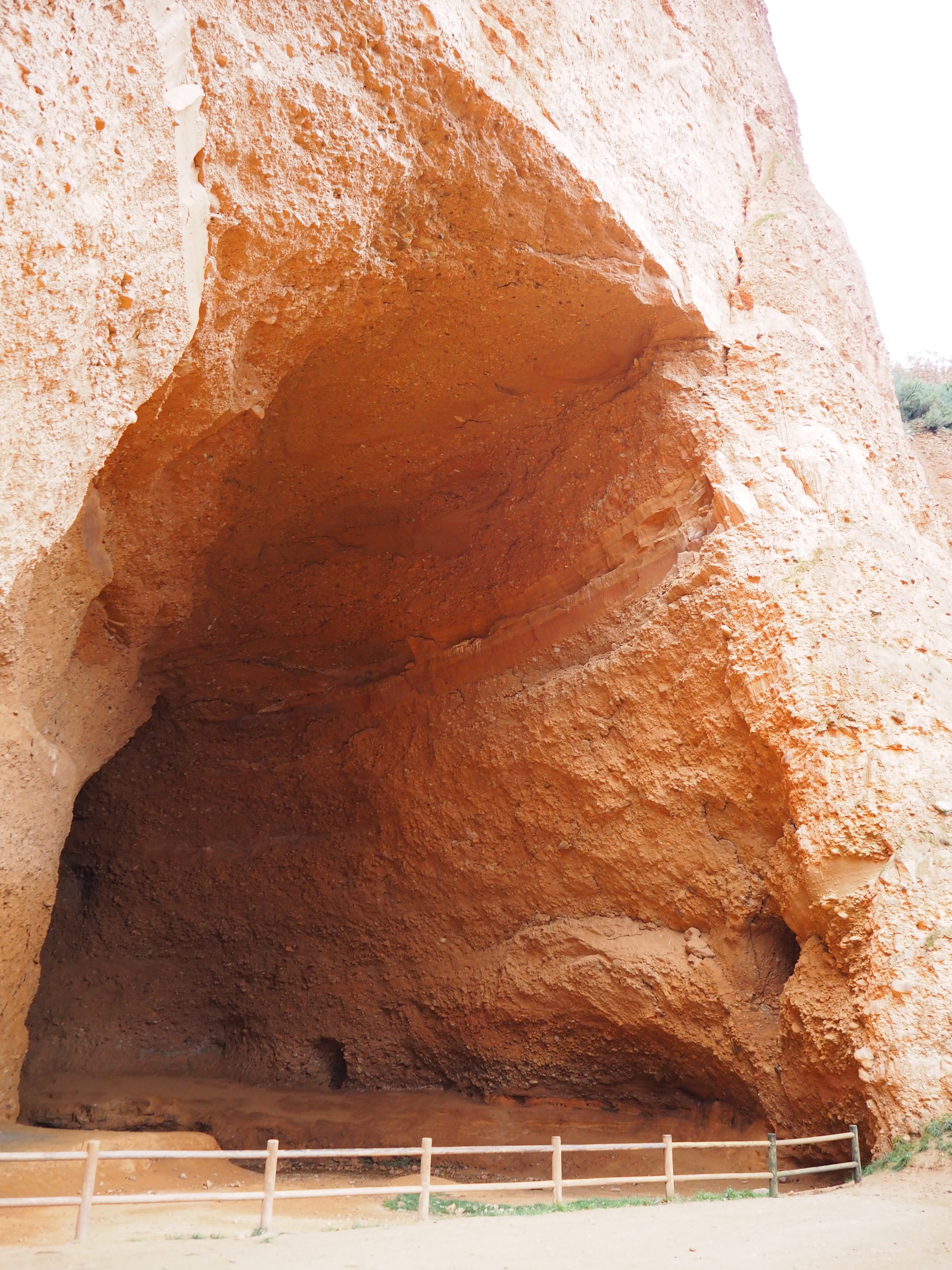 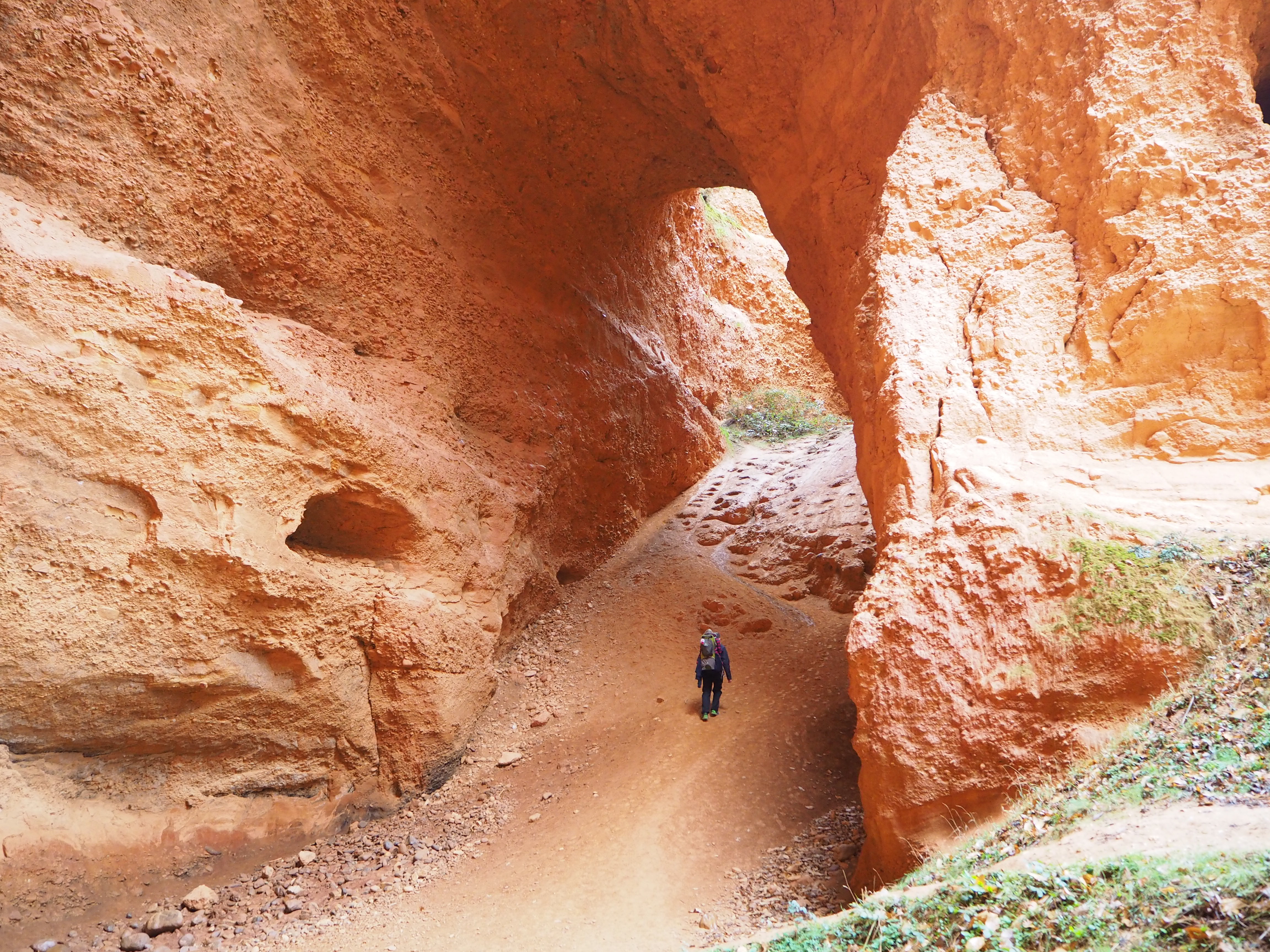 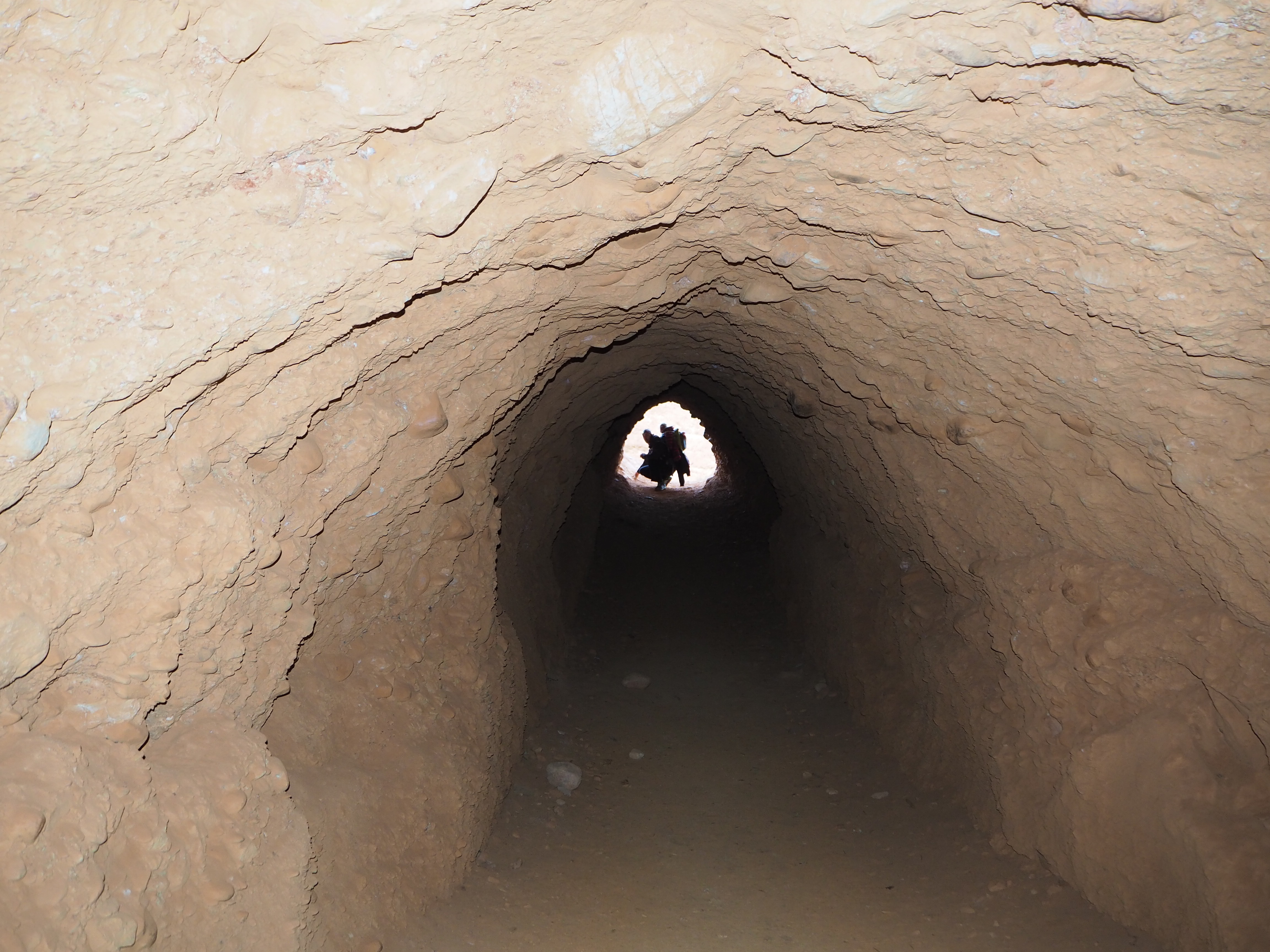 It was pretty steep in parts, and also very low too that needed some special attention to crawl around with a baby backpack on! After completing the Valineras route, we had the option of taking an even harder route, up a rocky, muddy, slippery, steep, forest track, to the top of another mountain to see the spectacular Las Medulas in all its glory! The mirador, Mirador de Orellan, offered an incredible panorama over the whole area of crumbling peaks and was totally worth the sweat and tough terrain. We were still beating the fog! Yes! 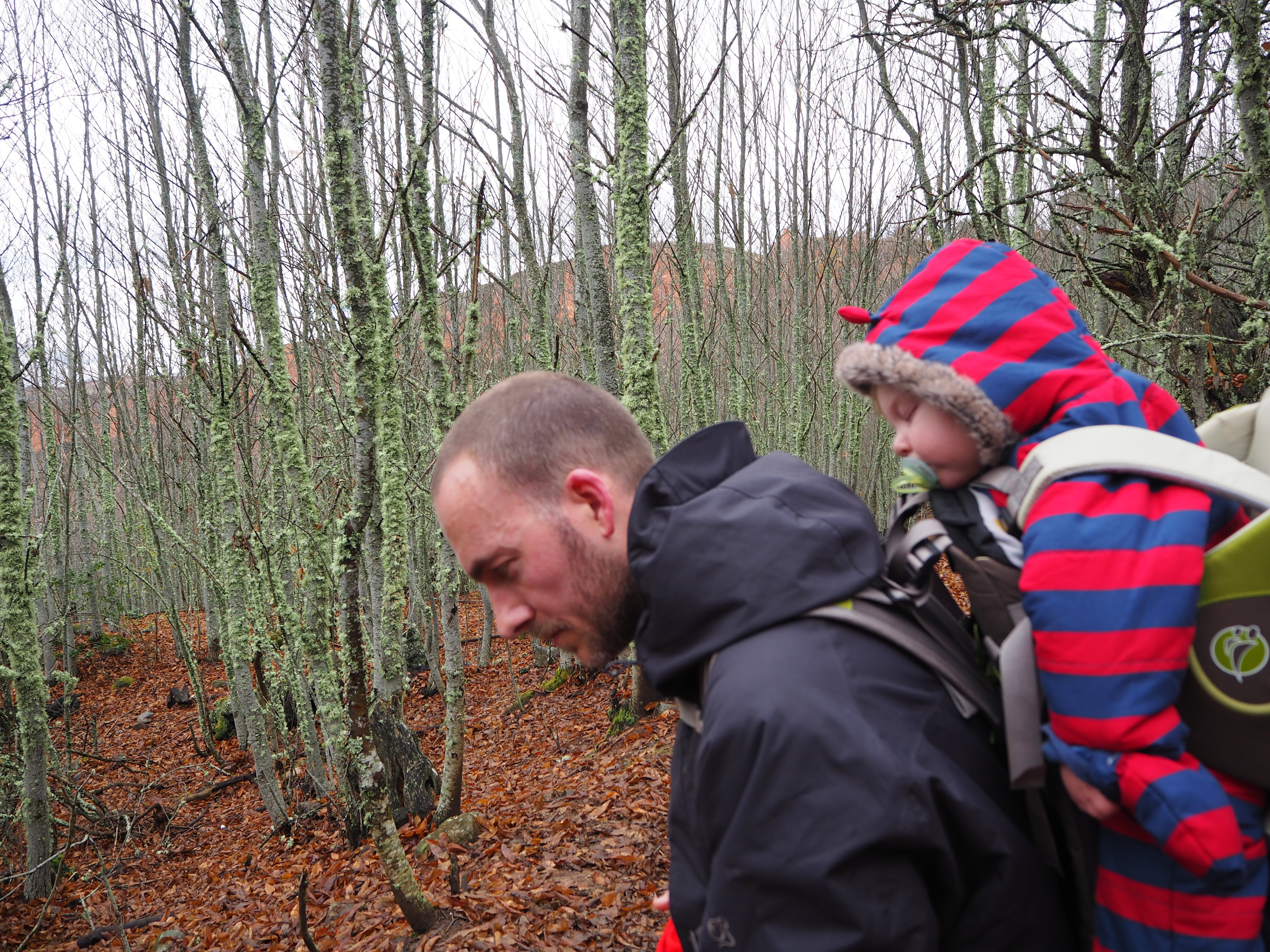 After a short stay at the top, it was back down the way we came, being careful not to slip over with the precious cargo on board! And low and behold, literally within minutes of arriving back at the motorhome, the heavens opened and the fog rolled in!

For anyone considering heading this way, it’s 100% worth the trip. It’s a truly magical place full of history and beauty. For an old mine, it’s pretty spectacular. So far, one of our best parts of the trip! 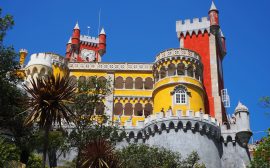 How to avoid the crowds of Sintra 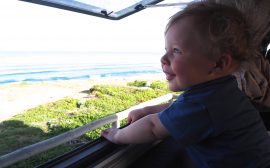 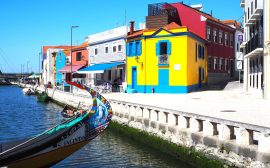 10 Unmissable Places to Visit in Portugal with your Family 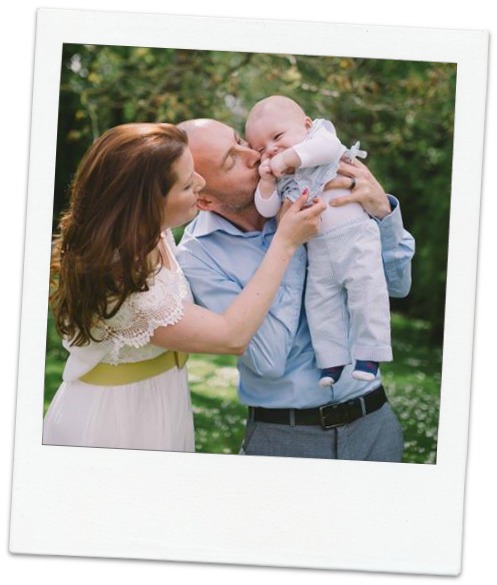 Welcome to our blog. This is the story of two travel lovers who decided to sell up, escape the rat race, and venture of a trip of a lifetime with our 1 year old boy. No house, no assets, just us, the motorhome, and a map as our guide. Follow our journey, we hope it inspires you to travel with your little ones.

Hey followers! If you are planning an Amazon purchase, the lovely people at Amazon will give us a few pennies if you click through to Amazon using this link.

Costs you nothing, just helps top up Ethan's adventure fund! Every penny counts. Thank you :) 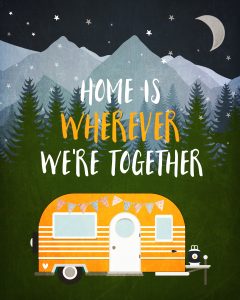